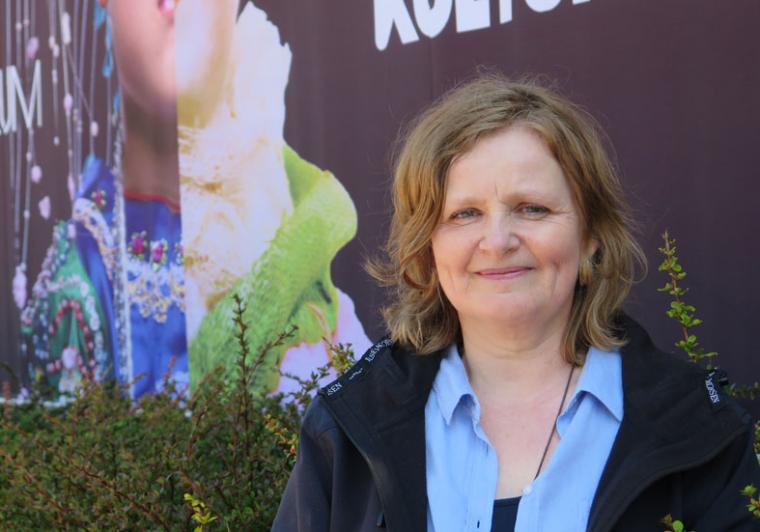 Hesther Bakker from Holland is doing her internship at Åland Museum where she is currently preparing the summer exhibition “Do objects speak Swedish?". One might wonder how she chose a museum in Åland. She gives a short answer: ”My great interest in Swedish language”.

- Ever since I saw the movies about Pippi Longstocking as a child I have liked the Swedish language that sounds like a song in my ears, she says in fluent Swedish.

After Pippi she inhaled everything she came across in Swedish, such as magazines and films. She read and practiced Swedish on her own and travelled to Sweden on vacations. A couple of years ago she also took a Swedish language course in Uppsala.

- I write columns in Dutch for the Internet and translate them into Swedish. In fact, I emphasize that I try to make an effort to translate them, she says, being aware that everything is not always be perfect.

Hesther Bakker lives in Drenthe region in North-Eastern Holland near the German border. For many years, she worked as a therapist in child and adolescent psychiatry. But recently she started to feel ready to change career and to do something that makes her happy and allows more space for her creativity. As a result, she started working at a small museum in her hometown.

When she visited the Emigration Expo in the Netherlands she met many representatives of Åland Living. After visiting the fair and encouraged by Jan-Erik Rask, Honorary Consul of the Netherlands in Åland, she sent an e-mail to Åland Museum and asked if it was possible to attend an unpaid internship for a couple of weeks at the Museum. She received the answer directly; “Welcome to Åland!”

- I thought it was worth testing and my family in Holland, husband and adult children, were understanding and encouraged me to try something new. That's why I'm here for a five-week internship and it feels good. I'm working with the exhibition process ‘for real’ and I feel that my opinions and input are taken seriously, she says.

There is a lot of work behind the scenes before an exhibition is ready to be opened; from the detailed planning stage of selecting the items and deciding how they will be exhibited and presented in text, to painting and building the displays.

Åland was not an entirely new acquaintance for Hesther. For a couple of years ago she and her husband were driving around in Roslagen in Sweden and arrived at Grisslehamn harbour. There they saw Eckerö Linjen ferry company’s advertisement for Åland and became curious. What's awaiting on the other side of the sea?

- At that time, we didn’t have time to take the ferry to Åland, but last year we visited Åland and drove around. We visited for example Vårdö and Geta, she says.

Hesther says, as so many other foreign visitors to Åland;

- It's so serene here, less stress and less hectic. We’re so many people living in a small area in the Netherlands where I'm used to queueing and struggling for space for everything. Here there are no queues at all.

- I can walk in the woods without feeling the least afraid. It's also great to have so much fantastic nature around you. I’ve been cycling a lot in the evenings and I have visited the nature reserve on Nåtö island where wild orchids grow.

Some things still puzzle her: The shops in Mariehamn, apart from the grocery stores, close so early, and the ferries to Åland seem to be more focused on food, shopping and entertainment than on mere transportation.

Also, it is difficult to get around in Åland without a car. There are buses, but they don’t run frequently and you need careful planning for a trip to the countryside or to the archipelago.

- In the Netherlands, you don’t have to check a timetable. One knows that there is always a bus or train coming soon, from early morning to midnight.

Hesther finds the local people friendly and helpful once you get in touch with them. However, some own initiative is required. It doesn’t seem that the Ålanders "jump on" foreigners for learning more about them.

- If I were born again I’d love to be born in Åland. It's a nice place and I like it here. However, for the time being I have no plans to move here. I have my family and my social context in Holland. But I’d be happy to visit Åland again!