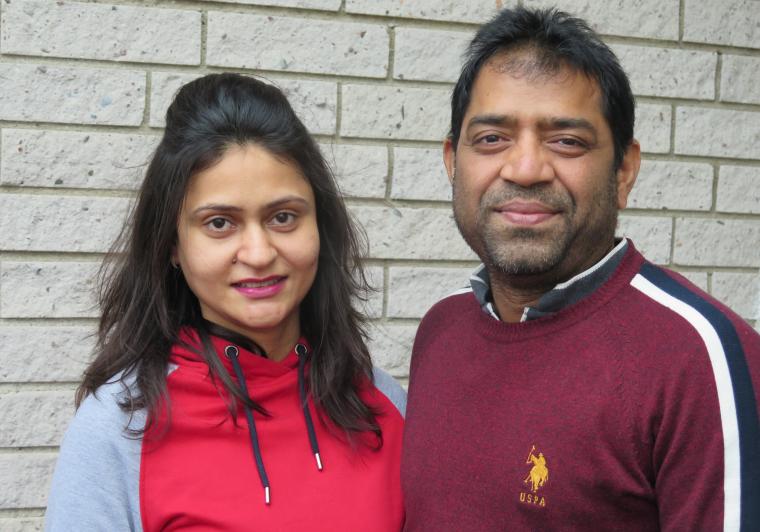 Open and welcoming atmosphere at PAF

From Bengaluru, India's Silicon Valley, via England to Åland and to work as systems and database administrator at the gaming company PAF’s headquarters in Mariehamn.

It may sound like a big step for Rajesh Kumar, but he found that both PAF as a workplace and Åland as home were so interesting that he did not hesitate to move when the opportunity was offered.

Rajesh Kumar and his wife Ashima Kaushik welcome us to their home in northern Mariehamn. Here they live near a forest area that offers nice bark paths for walking and jogging.

“We live close to most things. Our house is within a cycling distance from our jobs and when it gets a little warmer we will start cycling more often”, they say.

Rajesh Kumar studied IT technology at the Bachelor's level in Bengaluru and took his Master's degree in England. He also worked for five years at an Indian IT company that developed software, including booking systems, for companies in the travel industry.

But Rajesh wanted to try something new in another country and as his brother worked for PAF in Åland, it became quite natural to apply here. He was interviewed for a job and got it. The housing was no problem; the couple simply moved into his brother's house because the brother moved to England after more than five years in Åland.

“I truly like PAF a lot. I work in a team of 15 people of who ten colleagues are stationed in Åland, five in Helsinki. It is an open and flexible working culture and everyone is very helpful.”

The work is stimulating and the tasks correspond to his level of education. The working language is English.

“I also get to learn a lot of new things. Here you get to work with a wider sphere compared to a larger company in India where you are stationed in a small section with more limited tasks. Another difference is the working hours. Here we work 7.5 hours per day which is shorter than in India and it gives more time for other things in life.”

Easy to find a job!

Rajesh’s wife Ashima Kaushik, with a Bachelor's degree in IT education, says it was her husband's idea to move to Åland.

“But I fully supported him and said I would join if I managed to find a job. It was a very positive surprise for us that I was offered a job even before we moved here!”

Rajesh's brother had contacts in the IT industry in Åland and recommended Ashima for a position at the company Enfuce which develops systems for banking and financial services. She applied and got the job.

”It feels really good. I learn a lot all the time and I have nice and helpful colleagues.”

The couple says that Åland is a small community but big at the same time. Here is all you need and everything is within a walking or cycling distance.

“We can walk to the centre of Mariehamn or to a shopping centre near our home. The only thing we miss is a wider selection of Indian spices, but we can buy them in Stockholm. It's so easy to travel there on a day trip. However, it’s sad that there has been very little snow this winter. We were looking forward to experiencing a lot of snow!”

They also appreciate the safety in Åland. You never need to be scared or feel insecure on the streets.

“Of course, we are used to significantly more people around us, but we have heard that there will be another pace during the summer. We look forward to it. We’d also like to get out at sea for sailing.”

The couple takes Swedish classes twice a week.
“We’re about 20 students in a group and the atmosphere is nice. We really want to learn Swedish to integrate better in the community”, they say and give some examples on Swedish words they have learned so far; ostsmörgås and kanelbulle.

They go to gym too, preferably six times a week.
“Is it easy or difficult to learn to know people in Åland? Well, it’s very much up to yourself to be active and take contact with people. We have got new friends that we spend time with on regular basis.”

The couple can think of staying a longer time in Åland.
“15–20 years is quite thinkable, or even longer”, says Rajesh.