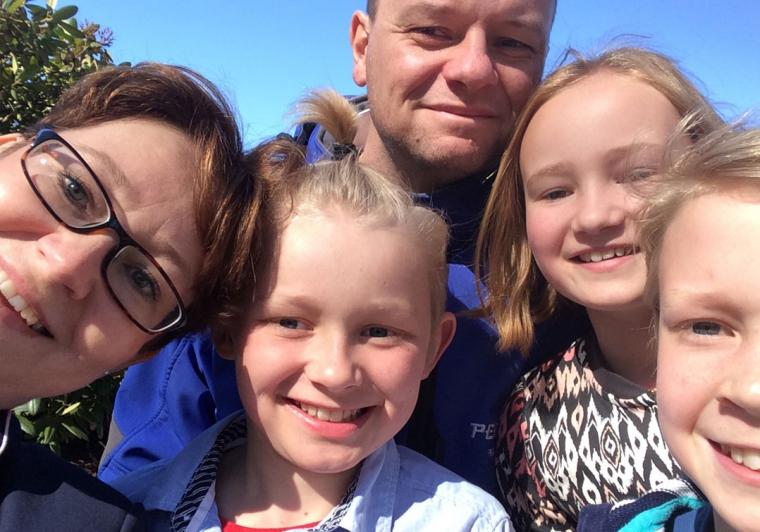 There are many reasons why Reeta and Rami Vehmas with their children Henri, 13 years, and the 12-year-old twins Ilmari and Laura, enjoy living in Åland. Still the best is the daily life.

“Everyday life counts,” says Rami Vehmas. “Here it takes just four minutes to work, in Helsinki it takes four minutes to go to the parking lot. You simply have more time for the kids here.”

Reeta Vehmas agrees;
“For families, Åland is a paradise. Everything is near and the quality of life is much better. Previously we almost lived in our car and drove back and forth to work and to different hobbies. Now the daily life is much smoother and less hectic.”

From a 27-million Shanghai to Åland with 29,000 inhabitants

Reeta and Rami Vehmas originally come from Lapland. The couple has studied and worked both in Finland and abroad, but since their children were born, the family has mainly lived in the greater Helsinki area. The only exception was around 2013 when they lived one and a half year in the multi-million city of Shanghai. In both Shanghai and Helsinki, Reeta worked as a pediatrician and Rami as a portfolio manager at Ilmarinen Insurance Company. So how did the family end up in Åland with 29.000 inhabitants?

"When I completed my pediatrician degree, I thought it would be nice to live in a small place," says Reeta. “We considered several options, but when I took contact with the Åland Central Hospital, the clinic chief Christian ‘Snuffe’ Johansson welcomed me directly. We had also heard many good things about Åland.”

Swedish skills in one year

Now the Vehmas family has been living in Åland for a little over a year. Reeta moved first, in the summer of 2017, and the rest of the family arrived in August. Only Reeta was fluent in Swedish.
"When we arrived here we had planned to stay for a year, a bit like an exchange year, so that everyone could learn Swedish. But now we like our new life so much that we want to stay here,” says Reeta.

Everyday life is easier in Åland

At first the family lived in an apartment in Mariehamn, but now they have bought their own house just outside town. Rami still works at the insurance company in Helsinki and commutes weekly. He comes to Åland on Thursday night and returns to Helsinki on Sunday night. On Fridays he works from home.
"In other words, he spends the weekend with us," says Laura.

“Even if Rami is away from Monday to Thursday, our everyday life is still easier here,” continues Reeta. Now the children are of course older and more independent, but still.

Since the arrival, Henri, Laura and Ilmari have been going to Strandnäs comprehensive school which both children and parents are happy with.

"We are very pleased with Strandnäs school, you’ll have to write it down," says Reeta in our interview. “They have an integration class with excellent support for non-Swedish speakers, so everything works really well.”

A sense of community and commitment

Reeta and Rami also like the many different hobbies the kids can choose from. The pace is not too hectic either, and the hobbies are cheaper than in Helsinki.
"Everyone is welcome to join, and the kids don’t need to take their hobbies as seriously as in Espoo where we used to live. Here kids can be kids, I think they’ve gained their childhood back in some way," says Reeta.

Laura dances in DunderDans group while Henri plays football and indoor bandy, and Ilmari plays football. As a former soccer player, Rami shares their interest for football and is involved in IFK Mariehamn’s Football association’s activities for juniors born in 2005. Even when it comes to football he sees differences between Helsinki and Åland.

“In Helsinki you pay the fee and then you expect someone else to take care of everything. Here everyone is involved in some way, all parents contribute with something.”

Reeta thinks that the Finnish word “yhteisöllisyys” describes the phenomenon and asks Laura for help with the translation. “Sense of community”, replies Laura.

"Yes, it's a bit like the world in which our grandparents grew up. Everyone was involved and you did a lot together. It is the same thing here in Åland.”

Enjoys working as a pediatrician

Reeta sees mainly benefits when it comes to her work as a pediatrician at Åland Central Hospital, ÅHS.

"For me ÅHS offers a very nice working environment. I like it and the atmosphere is good. Everyone stands up for each other and takes responsibility. I think it's common in all smaller hospitals, but I also think it's because we're on an island. When something happens, everybody’s help counts and this has an impact on general attitude.”

Focus on important things in life

In addition to school, work and easier daily life, the Vehmas family enjoys being close to the sea and nature.

"I just love being by the sea," says Reeta. When I take the short car or bike ride to work, I can see the sea from the road. It’s so beautiful and relaxing.”

According to Reeta the family likes kayaking and hiking and now they are planning to buy kayaks.

"We haven’t been able to kayak earlier, but it’s something we’d like to do," she says. Last weekend we went walking on Järsö hiking trail, it was lovely. Geta is fantastic for hiking too and there you can see the open sea and all the waves up from Geta’s rocky hills.”

To everyone who is thinking about moving to Åland, Reeta and Rami Vehmas would say that it’s only a matter of taking the step. And to find a job.

"If you’re a 25-year-old and enjoy shopping, you might think that Åland is a little bit too quiet and boring. But for families Åland offers incredible opportunities," says Reeta. “Here you can focus on the right things. Many people work part-time, and both children and adults have time for other things than work. Here people also know what is important in life; family and friends to name a few. And you can see that.”