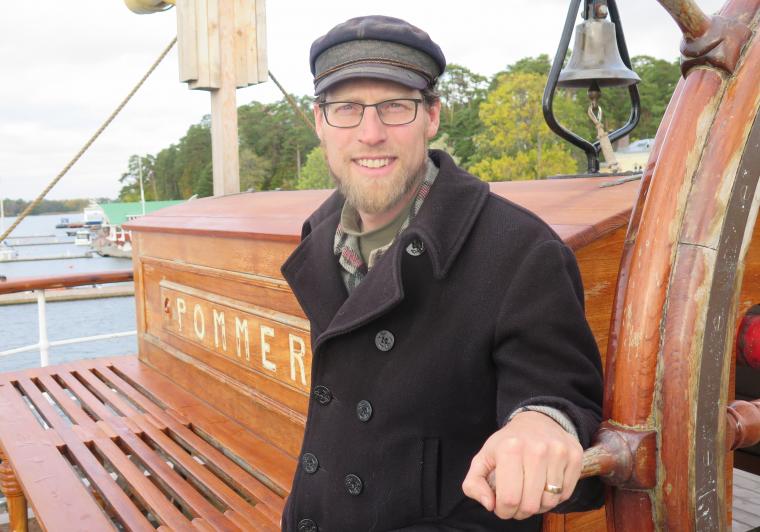 Marine archaeologist from the USA found his dream job in Åland

Nathaniel Howe from Seattle, USA, landed in his dream job in Åland – as a curator on the sailing ship Pommern. The ship is unique in the world and is more a less preserved in original shape since 1903 when she was built in Scotland. Thus, she is a real gem for a marine archaeologist.

As a curiosity it can be mentioned that there are also touch points between the Pommern and Seattle. During the time when the Pommern was sailing on the world seas, the ship once visited Seattle to load timber. Also, the timber for the Pommern’s newly renovated deck comes from Nathaniel's home region.

- It is nice to see that Åland is investing so much in preserving the Pommern and that she seems to be in the hearts of all Ålanders. The maintenance of the vessel has been done regularly and therefore the ship is in good condition. In Seattle, companies such as Microsoft, Facebook, Google and Amazon are headquartered and it is a completely different world. There you look forward all the time, not backwards in our history.

To the Vasa Museum

Nathaniel Howe has a solid education in his field. He has completed a master's degree in marine archaeology at East Carolina University in the state of North Carolina, USA. In addition, he has supplemented his education with studies in marine history and museology.

He has previously worked, among other things, as CEO of the Northwest Seaport in Seattle which hosts three museum ships, among them a lighthouse ship from 1904 that has some similarities to the Pommern.

He has participated in a number research projects in both Denmark and Sweden. He spent two years as a Fulbright Fellow at the Vasa Museum in Stockholm and a few summer months with various projects. For a researcher there is much to do in depth around the regal ship Vasa. One of Nathaniel's focus areas were the ships 400 remaining rig blocks.

Nathaniel knew, of course, about the sailing ship Pommern in Mariehamn. This is common in the maritime world almost all over the world. However, during his years in Stockholm he never made a visit to Mariehamn.

Last year he was told that there was a curator job vacancy on the Pommern. He had met Hanna Hagmark, director of the Åland Maritime Museum, at a conference in Denmark ten years earlier and was impressed by her leadership at the museum. He became seriously interested.

- I thought the museum represented good ideals and I was, as I said, impressed with how well they had taken care of the Pommern. The new custom-made quay with a bespoke dock is fantastic itself. This means that you can spend more time on both the maintenance and research than if you were sent to a commercial shipyard, he says.

Both practise and research

Nathaniel applied for the curator job, got it and started in April 2019. It was a rush start for the new opening on May 1, 2019. The Pommern had been anchored in another location in Mariehamn's western port for almost two years. During that time, the quay had been built. In addition, extensive work had been done on board. The deck had been refurbished, a lift had been installed between the decks to make the ship more accessible and a whole new visitor experience had been created.

The Pommern became a success; 85,000 visitors visited the ship by September 30 when the ship was closed for the season.

Nathaniel works with both research and practical tasks. The big project in the autumn is to prepare her for the winter.

Dreaming of a boat of his own

Nathaniel's wife has also moved to Åland and is now studying Swedish before applying for a job here.

- We would like to stay here for a longer time. Åland feels a bit like Seattle. Partly the same nature and climate, and there are many people of Nordic origin. But it is so much quieter here, no big city stress. What’s more, Åland has more sunshine hours than Seattle where it rains a lot. More and more people are moving to Seattle and traffic is constantly increasing, sometimes it took just ten minutes to get a certain place, another day an hour and a half. There are no car queues in Åland. Here you know that it always takes the same time. If you live and work in Mariehamn you don't even have to have a car. You can take a bike.

-We went cycling a lot in the countryside last summer. Next summer I hope we have our own boat so we can explore the archipelago!