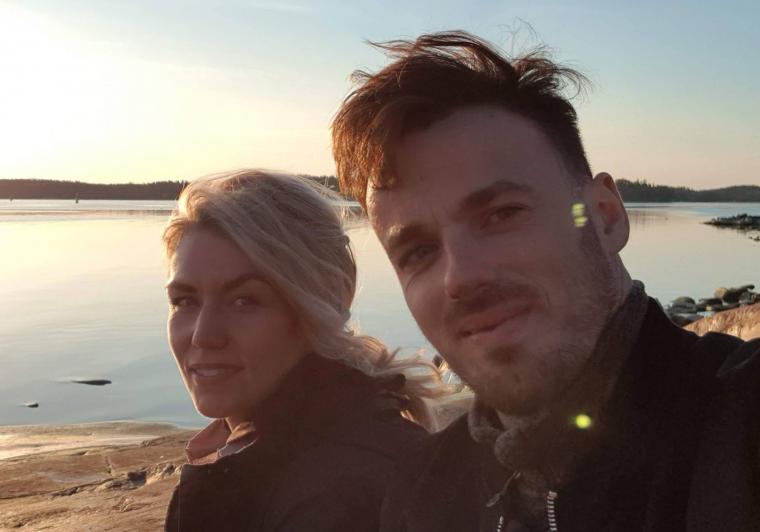 Mark Donaldson from Lauder in Scotland and Emelie Westerlund from Ostrobothnia, Finland, moved from Scotland via Spain to Åland for over four years ago. Here they found a home and a life they didn’t know they were looking for.

”It feels amazing to live in a fine house on this beautiful island and to breathe all this clean air”, says Emelie, and Mark agrees.

”Yes, we have so much here”, he says while he also admits that it has taken time to get used to live on an island, even if the communications are good.

”But, it’s what we get in exchange that counts!”

The way to Åland

Mark and Emelie met in Edinburgh when Emelie studied at the university with a scholarship from the Swedish Cultural Fund. After a couple of years in the Scottish capital, they decided to move on to Spain.
“We wanted new experiences so we cast the dice to see what there was for us.”

In Spain, Emelie started working for the family company “Dress Like Marie” which she runs with her mother and sister. Nowadays, Åland is the basis for the company's sales of clothes in stores and webshop.

But even if Mark and Emelie enjoyed living in Spain they felt it wasn’t the right place for them.

“Finally, we just decided to move to Åland. Mark applied for a job and got it, and we moved here.”

Åland was quite a natural choice for Emelie who had spent much of her childhood here. Also, her sister and grandmother live in Mariehamn. For Mark, the step was a bigger.

“I had more doubts than Emelie, but at the same time I wanted to test what it’s like to live in a different language environment.”

House and a doggy

During the first months in Åland, Mark and Emelie rented a house in Mariehamn.
“We moved here in the summer and really enjoyed it. We bought a dog, and within three months we had bought our own house.

The couple says that many people still think that it’s difficult to buy a house house in Åland if you don’t have the right of domicile, the local citizenship, to buy property.

“Buying a house was easy because it was located in a planned area. Compared to Scotland, the procedure was very smooth, and we got a lot more room for the money, says Emelie. Now we live with the sea in all directions and the forest right outside the door.”

Language is the key

Now, four years later, Mark thinks it has been easy to adapt to the Nordic culture in which he finds many similarities with the Scottish and British cultures. Socially it was no problem to settle down either.

”Making friends is easy to me, I play football and I was lucky enough to find a good job before moving here. I settled down in the Åland community fairly quickly.”

On the other hand, he initially felt frustrated and had limits with the language, although he managed well in English.

“One should not underestimate the importance of language skills. Languages ​​open up and make it easier to get into the community and culture. Humour can also be difficult to understand, it’s lost in translation.”

”So, now you understand how I felt when we were living in Edinburgh”, says Emelie who now thinks Mark can be funny in Swedish too!

Otherwise, the greatest contrast for Mark has been the surrounding landscapes.

“In Scotland I grew up far from the sea and then I moved to Åland where the sea is everywhere. The only thing I miss now is a high lookout point. Everything is so flat here!

Professionally, Mark and Emelie see both the pros and cons of Åland. Mark works with marketing and has recently started a new job as Marketing Coordinator at the technology company Enfuce.
”Åland is traditional and has something of a small-town mentality. At the same time, there is openness to new things that I think is typical for both Finland and the Nordic countries, but stronger in Åland thanks to the autonomy.”

They also mention the straight forward mentality, which they think is unexpected in such a small place.
“Åland is fascinating and I think it’s promising that there are so many modern and dynamic companies looking for international markets, especially in the tech industry”, says Mark.

It’s also a big plus to have access to so many services.
”It’s really amazing that Åland has its own hospital, a university of applied sciences and so many different types of services”, says Emelie. “There’s nothing you can take for granted in a community of only 30,000 inhabitants.”

However, for Emelie, as a self-employed person, the taxation border is challenging.

“E-commerce is more difficult from here because of the taxation regulations. At Dress like Marie we have solved this by moving the warehouse to Finland to facilitate the shipping of products to the other Nordic countries and Europe.

She still thinks that Åland is favourable for entrepreneurs.

“Just look at how many companies there are in Åland! And all the resources for small businesses! The Åland Chamber of Commerce, for example, and access to university trainees.”

In short, Mark and Emelie enjoy life in Åland. They appreciate the peace and quiet and closeness to nature.

“As an entrepreneur you always have a lot to do, but I still find it easy to find a balance between work and leisure in Åland. I value that highly!”

Sometimes, however, the island life gets too quiet. Therefore, Mark makes sure to leave Åland regularly to fill up with some big city impressions. Friends, music, hanging in the bars, dining experiences, and above all, crowds.

“Yes, I need it. Volume and diversity, rubbing shoulders with a lot of people!”

“I love when friends come to visit, and when I show them our favorite places I almost feel like an Ålander.”

Last summer Mark and Emelie came one step closer to being natives when they got their own boat. Both laugh and joke;

“Soon we’ll be Ålanders for real. Now we only need a summer cottage by the sea, only a few kilometres from our house!

Start your own business in Åland

More about starting your own business in Åland – The Åland Chamber of Commerce (Startaeget.ax)