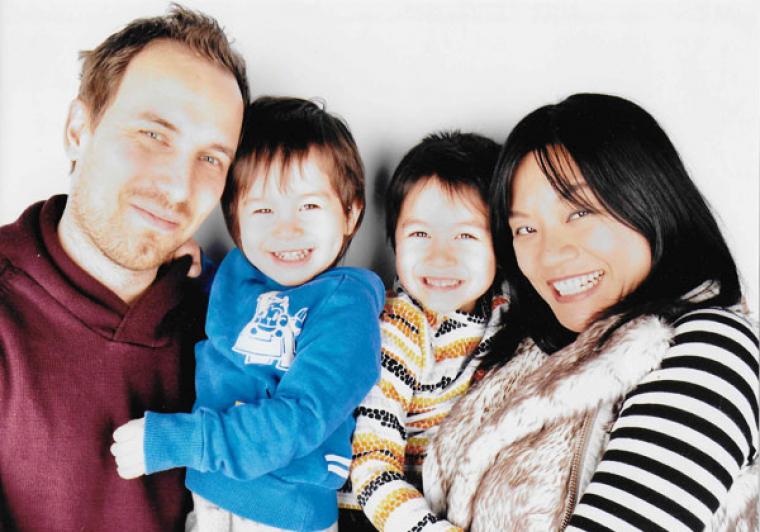 Lari Pihlajapuro from Helsinki and Katie Wu from Hong Kong met each other in Reykjavik during the 2005 World Othello Championships. After almost two years of long-distance relationship Katie moved to Lari in Helsinki. The couple lived there until 2010 when they moved on to Hong Kong.

– When our first child was born in 2011, we began to think moving back to Finland again” says Lari.

– We googled for ‘the best place to live in Finland’ and the result was Åland. Although we had lived in Helsinki for several years, I had never heard of Åland before.

– And I had only been once to Brändo for fishing, says Lari.

From Hong Kong to Åland

In April 2013, Katie, Lari and their little son Coby moved to Åland to live in a semi-detached house in Kalmarnäs, near Mariehamn. Living in Åland is quite different compared to Hong Kong.

– It's really like night and day, says Katie. In Hong Kong, we lived on the 51st floor, here the highest buildings are seven stories high.

Cooking meals was the biggest change for the family in the beginning.

– Suddenly we had to learn how to cook. In Hong Kong, there are restaurants everywhere and eating out costs only 3 or 4 Euros. In other words, it’s cheaper to eat out than to cook yourself.

In Hong Kong, Helsinki and the first months in Åland Katie and Lari supported themselves by playing poker on the internet. They have also been involved in many Othello contests, both as participants and arrangers. Before the family's second son Teddy was born in 2013 Katie also took a Swedish course for immigrants, arranged by Medis, the adult education centre in Mariehamn.

–  It gave me great support and helped me a lot.

In 2015, the couple began to study the opportunities offered by the local labour market and the entrepreneurial community. Both of them submitted their applications to the Business Lab Åland that helps the entrepreneurs start and develop their businesses and introduce them on the market in eight months. In October, Katie’s and Lari’s business ideas were approved and they are currently developing their new activities and businesses.

They see many advantages in starting up businesses in Åland.

– Moreover, the decision making procedures are short and it’s easy to get in contact with the right people, says Lari. This also makes marketing easier.

However, it is challenging if you don’t speak any Swedish, which especially Katie has experienced.

– Much of the information you need is available only in Swedish, she says. It would be good for Åland, and for all the future entrepreneurs if all necessary facts were also in English. Even if you speak and understand Swedish it’s difficult to read and understand complex fact texts.

Perfect for families with children

Katie and Lari are happy with their life in Åland even if they miss a wider selection of restaurants offering other cuisines than the Scandinavian.

– It’s peaceful, comfortable and good for children. At kindergarten, the children can run around and play. In Hong Kong the kids are introduced to homework already at the age of three, which is stressful for small children. Moreover, Åland is safe, which is nice for us parents.