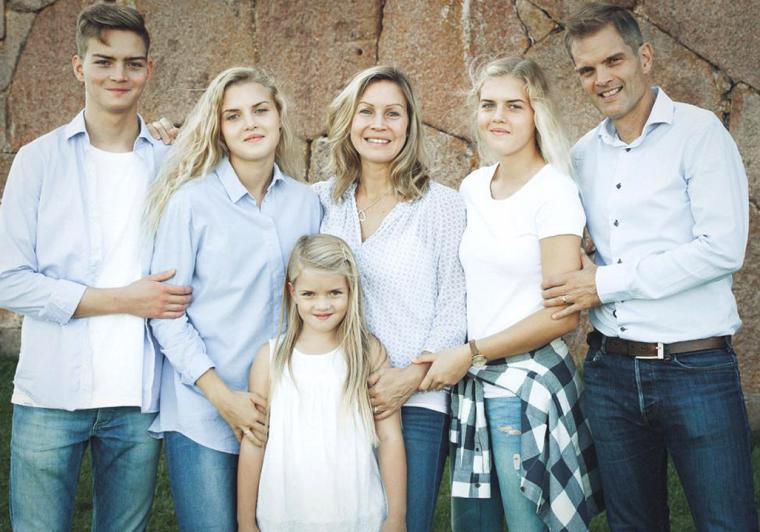 Everything matched for everyone in the family

There are many pieces that must fall into place if a family of six is to move to a new place; everything from schools to jobs and housing – and preferably at a right time that suits everyone.

Catrine and Anders Mattsson succeeded with this with their children Alexander, Isabella, Olivia and Sara. They took the step and moved to Åland in 2015. The family then lived in Parainen, Finland, after eight years of living in Stockholm.

Åland was no new acquaintance for the family. Catrine grew up here but moved to Turku to study nursing in 1993. Anders, who is from Parainen, has his sister with family in Åland. This in turn has resulted in many visits to Åland.

Over the years in Parainen, Catrine completed her studies as a midwife and had temporary work assignments at the maternity & gynaecological clinic at Åland's central hospital.

- It is a very nice place to work and I began to feel more and more that I would like to move back to Åland. But of course, it should suit to all of us, she says.

Football at the highest level

A decisive turning point in the family’s future plans came when the football-playing twin daughters Isabella and Olivia signed a contract with the football team Åland United; a team that plays in the highest league in Finland. When the request came from Åland United they were 16 years old and played in Pargas IF - Isabella as a striker and Olivia as a midfielder.

- It was great to have a contract with Åland United and a wonderful opportunity to be able to develop in football, says Isabella.

Sara, the youngest in the family, would start school the same year and would avoid changing schools later. Alexander, the oldest of the siblings, was also willing to move to Åland a year earlier than the others to start his first high school year in Åland Lyceum. Nowadays he studies economics in Turku.

What about jobs for the parents then? Catrine, of course, had no problems getting a job at the maternity and gynaecology clinic – first temporarily and later as a permanent employee. Anders, who had studied economics at Åbo Akademi in Turku, got a job as a finance manager at an Åland computer company Carus. He had previously worked for 18 years at Nordkalk enterprises which breaks limestone in the Baltic Sea area. From 1997 to 2005 he was stationed in Sweden and then in Finland as a business area manager and CEO for the subsidiary with focus on sales.

Anders liked his work at Carus but felt that he would be happy to take on more operational responsibility, preferably at an industrial company where he could benefit from his previous work experience. Such an opportunity appeared when Åland's Forest Industries needed a CEO. Anders applied for the job and got it and moved on October 1, 2019 into the CEO room in the head office in Godby. The company, which has about 50 employees, buys and processes Åland timber. A large part of the products such as sawn products and cellulose chips are sold for export.

- I enjoy challenges and it feels good so far, he says.

Isabella says that many new things happened at once; there was a new school and a new football team at high level. The days were long and intense.

- After the school day, there was a car waiting for us to take us to football training and on weekends there was often a football match. But everything went well and I enjoyed it. Åland Lyceum is a nice school with a good atmosphere and Åland offers good pitches and halls for football. We have a good team spirit and the players come from several different countries. It is both rewarding and educational to learn from other cultures, she says.

The sisters finished high school in 2018 and Isabella spent a semester in a college in the USA where she also played soccer. She returned to Åland United and has now, after four seasons, taken two bronzes and one cup silver with the team. Olivia has been playing in the United States since the beginning of July this year.

The family lives in their newly built house in a new residential area a few minutes by bike from the centre of Mariehamn and within a walking distance from a beach. Sara is doing her fifth year in the same school she started in. She walks to school on her own along a pedestrian and bicycle path.

- I like my school, she says. And then I play football and go dancing several times a week.

With many children and many activities, there is a lot of driving here and there. Therefore, the choice to live in Mariehamn was a good one for the family. They wanted to live so close to all activities as possible.

Catrine sings in a choir and plays tennis. Anders keeps himself fit with running and cycling.

- There are good roads for cycling in the countryside. You can choose less busy roads and there are also some new bike lanes. You can take rounds of 50–60 km, he says.

Planning according to ferry departures

So, what is missing? Not much, it seems. Maybe many good friends from the years in Parainen "but it is not far to go and visit them".
- It takes a little while to get used to the fact that you always have to plan your trips according to ferry times. And storms can sometimes stop a scheduled trip too, Anders says.
- We like it here. We have lived in different places for eight to ten years at a time, but I think and hope we stay here longer, says Catrine.