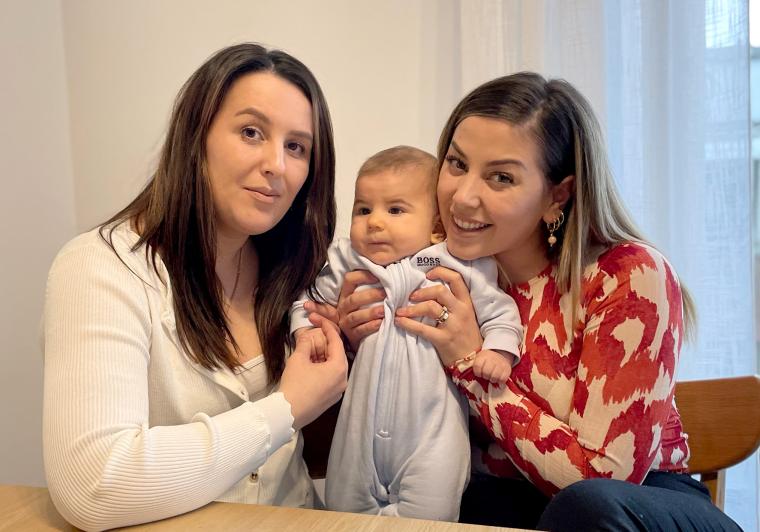 Life is so much simpler here!

Sisters Arbëreshë “Beshi” Zekaj and Erlinë Katajamäki were born and raised in Kosovo but now live in Åland with their respective families.

- My husband and I only intended to try out living in Åland for a while, but we have now lived here for four years and are looking for our own house, says Arbëreshë, or Beshi as she is also called.

Beshi moved first, and her path to Åland went via Gothenburg.
- I moved from Kosovo 13 years ago when I met my husband Arsim, so it was thanks to love that I came to Sweden.

Before the move, she had already studied dentistry at the university in Kosovo for two years, but in Sweden she had to start from scratch.
- I had to work really hard to first learn Swedish before I could continue my studies, and as a qualified dentist, there were no jobs nearby. I had to commute weekly before I went on maternity leave with our daughter Andrea.

Through acquaintances, they heard about Åland.
- We had never been to Åland before, but knew it was safe and good. Also, it was close to Sweden, where Arsim’s family is, and everyone spoke Swedish, so we did not have to learn a new language. When we both got jobs, we decided to take the leap, and it feels great! We have a higher quality of life, and now we don’t have to commute, it only takes a few minutes for me to walk to work.

Andrea is now five years old and goes to day care. She also now has a little brother, one-year-old Anton, and Beshi, after parental leave, has just started working part-time as a dentist at Citytandvården in Mariehamn.

Erlinë Katajamäki’s path to Åland went via Beshi and Arsim.
- Erlinë came to visit us in Mariehamn, but since we were tired parents of small children at that time, we asked our neighbor and new friend Raine to jump in as a “tour guide” and show her Åland. It went so well that they fell in love!

- Yes, then everything went very fast, says Erlinë and laughs. I think the distance between Åland and Kosovo accelerated the whole thing a bit. We could have had a long-distance relationship, but instead chose to risk it and take the leap.

Erlinë has now lived in Åland for almost two and a half years. She and Raine are married, and the family has expanded to include their little son Luan.
- I moved to a new country with a new language and a new culture. It was very exciting, but also a little scary.

Right now, Erlinë is on parental leave, but during her short time in Åland she has already had time to learn Swedish and has gotten a teaching job at Källbo elementary school in Godby.
- The school’s principal believed in me, and I am very grateful for that. Right now, I am a teacher in “Swedish 2” and have students who have also moved to Åland and are going through the same things as I am, so we learn a lot from each other.

- In the beginning, Raine and I spoke English with each other, but now Swedish is our common language. He is from Espoo and is actually Finnish-speaking. I have also received a lot of help from Medis and taken evening courses.

Both Erlinë and Beshi praise the Ålanders, whom they experience as open and welcoming.
- Everyone has been very helpful, and it has felt safe to dare to speak Swedish and ask questions.
- But it is clear that you need to do your part as well, Beshi adds.

Erlinë finds it interesting to compare Kosovo and Åland.
- There is a lot to learn from both cultures. At dinners, for example, Ålanders stay at the table for a long time and like to drink wine. In Kosovo, instead, we have lots of food on the table that we eat very quickly, then we go to the living room and drink tea, eat nuts and hang out for a long time as part of the dinner.

The conversations are also livelier and there is no room for reserved silence.
- I often have three conversations going on at the same time, and I keep up with them all!

Erlinë and Beshi like the small community where everyone knows each other.
- We are from Gllogoc, which is a small town, and recognize that feeling of security. People are also nice and greet each other.

- It feels good that Luan is growing up here. Society is safe and the economy and healthcare are good. Child health clinics like those in Åland, for example, are not available in Kosovo, where you only go to the doctor when you are already ill.

The sisters are also grateful to live close to each other, especially as the rest of the family is scattered around in Kosovo and other European cities. So, it is especially nice that cousins ​​Luan and Anton are close in age and that Beshi and Erlinë have been on maternity leave together.
- We have tried out Folkhälsan’s family café and baby swimming, started training at the gym and taken Spanish courses at Medis.

Erlinë is also studying remotely via NTI to get her qualifications in Swedish.
- The only thing we really miss are large shopping centres, they both exclaim.

Still, they think that the possibilities and opportunities in Åland make it worth it.
- There are good education and job opportunities, day care with few children and plenty of staff, nice nature, and everything is close by! You get a completely different quality of life with your family.

- Life is so much simpler here. It can’t be compared to any other country!